Latest media reports say that Google has updated the design of the new Nexus 5 lot better. Because some users complained about the Nexus 5 speakers and buttons! 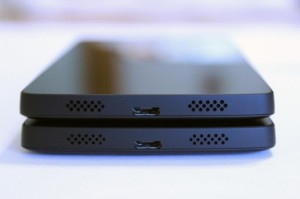 This news comes from XDA Forums thread about the design of the Google Nexus 5 Smart Phone pure android latest version manufactured by LG as well as the Nexus 4 it was reported that Google received complaints about speakers and the buttons on the Nexus. 5 is not as tight as it should.

Google makes the last hole ordered LG to expand Nexus 5 speakers so that the sound on the TV speakers sound better. To adjust the Power button and volume buttons up tightly. Do not loose like a lot first.

This new model has a serial number (s / n) code begins with 311 I, who are eager to buy Nexus 5 Observe this number as well. The numbers are located on the side of the box. But if not serious about the jack. Or small room speakers, do not worry. About system No problem at all ^ ^.

Watch compare Nexus 5 lot new with the old plot below it. Machine on a new plot.

Previous Telenor Easypaisa ATM Card For Their Customers
Next Now Get lowest call rate to UK, USA & Canada by Ufone