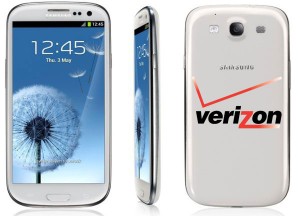 The latest software update for the Samsung Galaxy S III 4G Android smartphone running on the Verizon Wireless network delivers a bunch of goodies. Offering many of the qualities the Galaxy S4 delivers, the software boost gives Big Red’s Galaxy S III plenty of under-the-hood improvements. The 16 GB variant for Verizon currently retails for one penny on contract at select online retailers, and this latest boost provides the popular Multi-Window functionality that was previously available only on the Galaxy Note II and Galaxy S4 smartphones.

The Multi-Window feature splits the handset’s large screen into two smaller windows, giving you the ability to multitask by handling separate operations at the same time, while also allowing you to move back and forth between the two windows and integrate their content. NFC reception has also been improved with this recent update, and you can now access direct carrier billing for Google Play. An upgraded Flipboard is now available for the Verizon Galaxy S III, bringing all your favorite social networks like Twitter, Facebook, Flickr and Instagram together in one spot for instant updates and access.

The handset has been available since the Summer of 2012, and the Galaxy S III is slimmer than most 4G smartphones at 0.34 inches (8.1). Weighing just 4.70 ounces (133 g), the phone is also lightweight. The Galaxy S III for Verizon protects its display with a scratch resistant layer of Corning Gorilla Glass 2, while the large 4.80 inch Super AMOLED screen delivers 16 million separate colors when rendering visuals. Display resolution runs 720 by 1,280 pixels, and is delivered at the rate of 306 pixels per inch.

A front facing chat cam with video call support is also on board, and a full 15.0 hours of talk time is capable from a single charge. Qualcomm adds the Snapdragon S4 Plus MSM8960 system chip, built around a dual core 1.5 GHz CPU. A full 2.0 GB of RAM memory is on board, and the handset is also available in a 32 GB version. A music player and YouTube video player have been included, as well as Bluetooth 4.0 and mobile Wi-Fi hotspot support for multiple wireless devices.

The Samsung Galaxy S III 16GB Black can be purchased at a discounted price tag now starting at $0.01.